Tired of Bank Bailouts and Hyperinflation? Bitcoin Offers Something Different 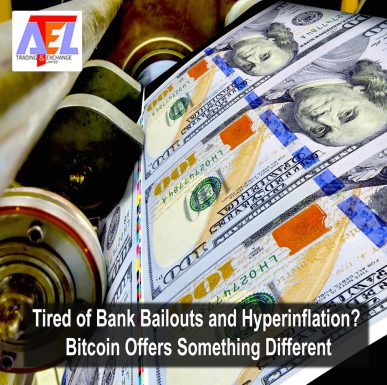 Tired of Bank Bailouts and Hyperinflation? Bitcoin Offers Something Different

People often wonder why a cryptocurrency with a limited supply like bitcoin has been gaining attraction over the years. Since the 2008 financial crisis, the world’s central banks have printed around $12-30 trillion worth of promissory notes, and more than $10 trillion in negative-yielding global bonds. However instead of the newly printed money helping global citizens, many complain that methods like quantitative easing (QE) were not distributed properly. People believe the central banks created hyperinflation and a large imbalance of income inequality because all the funds were given to the banker’s friends — The money never trickled down to help the world’s citizens.

The 2008 QE Domino Effect: The Boom Has yet to Bust

Back in 2007, the US subprime mortgage market started collapsing because many large financial institutions were selling homes to people who couldn’t afford them, and the bankers played a game of derivatives roulette with the bunk mortgage notes. Soon enough the US subprime mortgage market exploded and it initiated an international banking crisis soon after Lehman Brothers crumbled on September 15, 2008. After Lehman Brothers buckled, bureaucrats worldwide began clamoring to the central banks to help them during the economic disaster. Politicians urged banks to stimulate the economy with a process called quantitative easing (QE). Essentially the central banks stemming from the US, Eurozone, the UK, Switzerland, Japan, and Sweden printed lots of fiat reserves for large-scale asset purchases like government bonds.

Instead of helping global citizens QE allowed the central banks to further divide economic inequality and caused many countries to suffer from massive hyperinflation. From 2008 to 2017 the world’s banking cartel printed over $12-30 trillion dollars worth of fiat, initiated hundreds of interest rate cuts, and created over $10 trillion in government bonds out of thin air. The truth is no one knows exactly how much the central banks have printed and handed out to their friends. Research from the University of Missouri estimates the Federal Reserve printed $29 trillion in fiat and gave it all to the central banking cartel and special interests.

Because of the QE practices, the creation of overabundant and mismanaged monetary assets accelerated inflation in many different countries. Now in 2018 areas like Venezuela, South Sudan, Suriname, Zimbabwe, Argentina, Egypt, Sierra Leone, Azerbaijan, Haiti, Ukraine, Kazakhstan, and Nigeria are all suffering from rising inflation and manipulated financial markets. Now in 2018, in contrast to the hardships taking place in these countries, the US dollar, the housing market, and the global stock and bond markets are considered to be forming a massive bubble again. Some economists are predicting another economic bubble pop similar to or worse than the 2008 financial crash.

Like a psychic Satoshi saw all of this coming and predicted the effects of quantitative easing in the genesis block when he described how Chancellor Alistair used the crisis and false claims in order to bolster the idea of massive money printing and large-scale asset purchases. The message inside the genesis block’s coinbase parameter states, “The Times 03/Jan/2009 Chancellor on brink of second bailout for banks.”

Satoshi’s cryptic message in the Bitcoin genesis block explains that fiat currencies are subject to manipulating bureaucrats breaking the rules of economics for short-term recovery and spreading the world’s wealth to only a chosen few. With a better distribution process (the limit of speed or difficulty to mine newly minted coins) and a limited supply (21M), Bitcoin is meant to be different than today’s financial system where politicians can change things on a whim by using provocative media campaigns and an over-hyped economic crisis. The Rise of Political Dissent, Occupiers, Activists, and a Band of Misfits Pushing Nerd Money

Some people realized rather quickly how horrible the wealth inequality was a few years after 2008 when thousands of protesters worldwide initiated the Occupy Wall Street protests. However, most people don’t know the extent of how much damage politicians and central banks have caused because we haven’t seen a severe financial crisis since 2008. But many people believe the countries like Venezuela suffering through hyperinflation is a sign the bubble will soon burst. Usually, during a financial crash ‘smart money’ moves their funds into assets like precious metals that offer a more reliable hedge against inflation. When the next crash appears society will see if Bitcoin can actually be useful as a hedge against hyperinflation. Many people believe individuals will seek out a hedge using Bitcoin, and the hard money will ultimately be used to battle against the failing monetary processes initiated by the world’s overlords.

The libertarian evangelist and former congressman Ron Paul believes quantitative easing and now ‘quantitative tightening’ has spurred the popularity of cryptocurrencies exponentially. Paul thinks the world’s central banks and the US Federal Reserve, in particular, are to blame.

“I think it’s going to continue to do exactly what it’s doing. It’s going higher and it’s going lower,” explains Ron Paul on CNBC last December. “We can look at what’s happening now, which to me is a climactic end of QEs.”

I think cryptocurrency is a reflection of the disaster of the monetary dollar system — I think if you had not had the QEs, and the massive amount of inflation, and places looking for the easing dollars to go, you might still have the cryptocurrencies. But I don’t think you would have this exponential bubble that is going on. We don’t know when the bureaucrats and the political demagoguery will run out of options and monetary magic tricks, but we do know there is a superior system available today. There are already signs of people flocking towards Bitcoin’s ‘Plan B’ in many of the countries suffering from hyperinflation, capital controls, and demonetization. However, Satoshi explained that Bitcoin is not the complete solution to society’s monetary and political problems, but emphasized Bitcoin is still a powerful tool that can help economic freedom going forward.

“You will not find a solution to political problems in cryptography — But we can win a major battle in the arms race and gain a new territory of freedom for several years,” Satoshi explained on November 7, 2008, before the codebase was launched.

Governments are good at cutting off the heads of a centrally controlled networks like Napster, but pure P2P networks like Gnutella and Tor seem to be holding their own.

What do you think about Bitcoin being used as a tool to fight for more economic freedom and fight against the demagogues who manipulate our economies?

Disclaimer: The views and opinions expressed in this article are those of the authors and do not necessarily reflect the official policy or position of atelexchange.com. The web portal and firm atelexchange.com is not responsible for or liable for any content, accuracy or quality within the Op-ed article. Readers should do their own due diligence before taking any actions related to the content. atelexchange.com.com is not responsible, directly or indirectly, for any damage or loss caused or alleged to be caused by or in connection with the use of or reliance on any information in this Op-ed article.