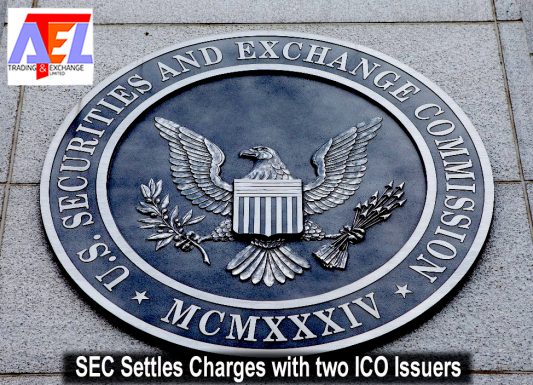 The U.S. Securities and Exchange Commission (SEC) has settled charges with two initial coin offering issuers. These cases are the commission’s first to impose civil penalties “solely for ICO securities offering registration violations.” Both companies have agreed to refund investors, pay penalties, and register their tokens as securities.

On Friday, Nov. 16, the SEC announced “settled charges against two companies that sold digital tokens in initial coin offerings (ICOs).” The agency explained that Carriereq Inc. (aka Airfox) and Paragon Coin Inc. both “consented to the orders without admitting or denying the findings,” elaborating:

These are the commission’s first cases imposing civil penalties solely for ICO securities offering registration violations. Both companies have agreed to return funds to harmed investors, register the tokens as securities, file periodic reports with the commission, and pay penalties.

The two companies’ tokens are neither registered with the SEC nor qualified for an exemption to the registration requirements.

Stephanie Avakian, co-director of the SEC’s Enforcement Division, emphasized that “companies that issue securities through ICOs are required to comply with existing statutes and rules governing the registration of securities.”

The orders impose $250,000 penalties against each company and include undertakings to compensate harmed investors who purchased tokens in the illegal offerings.

These two cases follow the agency’s first non-fraudulent ICO registration case of Munchee Inc. The SEC did not impose a penalty in that case because the company stopped its offerings before delivering any tokens and promptly refunded investors.

Both Airfox and Paragon conducted token sales last year after the SEC warned that ICOs can be considered security offerings in its DAO report, a landmark paper that serves as the defining document for ICOs to avoid being categorized as securities in the U.S.

Boston-based Airfox raised approximately $15 million by selling 1.06 billion of its tokens to more than 2,500 investors globally through various websites that it controls. The company claims that the funds would be used “to finance its development of a token-denominated ‘ecosystem’,” the SEC described.

Established in July last year, Paragon sold its tokens to approximately 8,323 investors, including those in the U.S. The company “raised approximately $12 million worth of digital assets to develop and implement its business plan to add blockchain technology to the cannabis industry and work toward legalization of cannabis,” the commission noted.

Paragon issued a statement on Friday confirming that it has reached a settlement agreement with the SEC after working on it with a team at the commission for over a year. CEO Jessica Versteeg calls it “a very positive agreement … that will effectively put an end to the uncertainties of the legal status ” of her company’s token.

What do you think of the SEC settling charges with the two ICO companies?