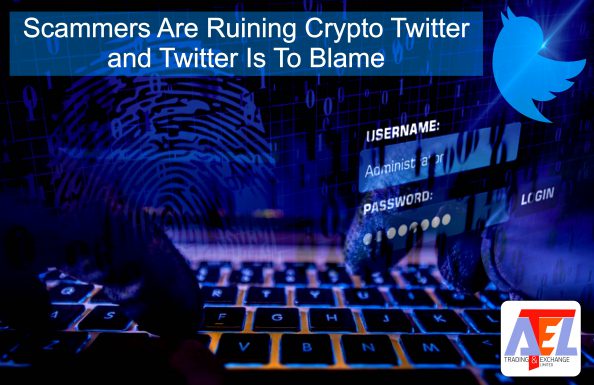 You’ve heard of the scheme, seen the tweets, and been smart enough not to send cryptocurrency in the promise of receiving more back. The Twitter crypto scam, in which fraudsters impersonate the accounts of exchanges and influencers, is as simple as it is pernicious. While the odds of anyone falling for these scams is remote, they’re spoiling crypto Twitter for everyone – and Twitter is to blame.

Did You Hear the One About the Special Giveaway?

“Big news from the Poloniex team today!” tweeted the U.S. exchange on Monday, announcing its acquisition by Circle. The first response to the tweet was as predictable as it was pitiful: “We аre joining Circle! To commemorаte, we’re giving аwаy 2000 ЕТΗ,” wrote “Palooniex”. “To pаrticipаte, senԁ 0.3-3 ЕТΗ to our аԁԁress below аnԁ get 3-30 ЕТΗ bаck. Hurry!”

It’s easy to get mad at scammers for perpetrating these sorts of frauds, but the real blame lies with Twitter. Scammers gonna scam after all; it’s up to the platforms to combat their attempts to ruin the service for everyone else. These fraudsters effectively serve as pen testers, seeking weaknesses to exploit for their own personal gain. The frustrating thing is that thwarting them would be a simple fix, but Twitter either doesn’t care or has bigger fish to fry, and thus the scams continue unchecked and unabated.

Some people view these low-level scams as a form of social arbitrage: taking crypto from the stupid and redistributing it to the smart. It’s true that it takes a particular level of stupid to send money to a stranger because they promise to send you more in return. But even for the majority of crypto users who don’t fall for these scams, they’re still ruining crypto twitter. Reading the replies to tweets from verified users is now pointless because they’re filled with begging rather than comments which add to the discussion. It’s also getting tiresome having to read repeated tweets from crypto influencers stressing that they have not and never will be giving away free cryptocurrency.

There is a number of solutions Twitter could implement to combat the practice, none of which would require extensive effort on their part. For one thing, they should make it impossible for an account to post a reply to an account they have already blocked. At present, crypto figures are unable to view the scams being perpetrated in their name because the fraudsters block them in advance. The second thing Twitter could do is prohibit accounts from creating a similar combination of avatar and username. Creating an account with the username “palooniex” should not in its own right be grounds for concern, but doing so in conjunction with the same Twitter avatar as Poloniex should be.

Twitter is so broken right now that someone succeeded, this week, in obtaining a verified account for Justin Sun. The fraudulent account mimicked the Tron founder right down to the blue tick and then proceeded to promise free crypto to all via a TRX airdrop. There was just one catch: participants first had to send him some cryptocurrency. Like most organizations that gravitate from nimble startup to hulking corporation, Twitter is a victim of its own success. Back when it was a nimble speedboat, it could adjust its position on the high seas with ease. But now that it’s an oil tanker, making the same maneuver takes aeons. And all the while, the scammers and fraudsters keep mounting up.

Do you think Twitter is to blame for failing to crack down on scammers?

Let us know in the comments section below.