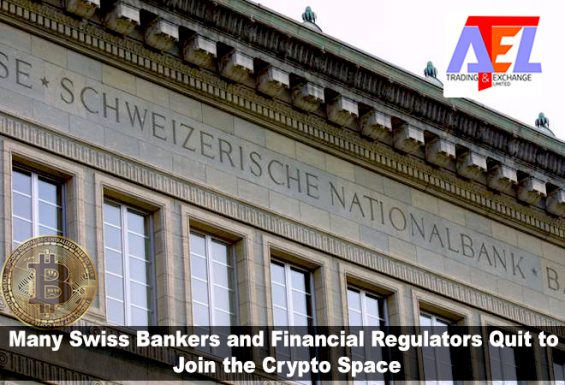 A lot of people in Switzerland have left the traditional financial sector to work in the crypto space, in which the banking nation is now developing a niche market. The Swiss banks don’t show enthusiasm officially, but they massively have interests in dealing with Bitcoin, insiders say.

From Crypto Valley to Crypto Nation

The latest Credit Suisse crypto mover is Andrew Peel, efinancialcareers reported, Peel has left Credit Suisse to become head of digital asset markets at Morgan Stanley. He’s not the only one. At least eleven other people at Credit Suisse’s Zurich office have also succumbed to joining the crypto world in the past year, the financial news outlet highlighted, Peel was reportedly the latest to go with that flow.

Switzerland has seen a wave of crypto startup companies rushing into Zurich, Switzerland’s financial capital, and Zug, a Swiss town now commonly known as Crypto Valley, in the past two years. Many Swiss crypto companies are trying to operate like banks but they avoid deploying too much marketing noise, they just deliver, “Swiss style.”

Crypto Finance Group, a company which has an office in Zug and most of its manpower working in a luxury villa in Zurich dubbed “Crypto Villa,” is far from looking like a Silicon Valley garage. The atmosphere in the villa, which news.Bitcoin.com visited, is very much of a Swiss private bank’s. The board of Directors of the Fintech company founded in June 2017, includes Raymond J. Baer, a relative of the Swiss private bank Julius Baer, and Jan Brzezek, formerly Business Manager for the President of UBS Asset Management.

“With our longstanding background in finance, we adopted the standards from traditional markets like Equity or FX and built a state-of-the-art order-execution and -routing tool, including various algo-tools for our Crypto Broker,” Jan Brzezek, the CEO and founder of Crypto Finance told news.Bitcoin.com in an interview in Zurich. “Our strength lies in the fact that we have a great team. It is a good mix of tech guys as well as guys who come from the Swiss financial industry. That is why we can easily communicate with all the large financial intermediaries and the regulators, because we speak the same language,” he added.

Many Swiss banks are prudent nowadays, as they do not want to take reputational or financial risks. “Despite the big crisis that occurred with the issue of the taxation of American assets, Switzerland still represent 25% of the global offshore market. That means Swiss banks manage 25% of all cross-border assets managed around the world, which is enormous for a country that small. Switzerland is strong but humble. There is a lot of talent and know-how in Switzerland for the development of these new technologies and their application to finance,” Yassine Ben Hamida, the former market head at Julius Baer, and former head of financial institutions Emerging Market at Credit Suisse, who’s now officially involved in cryptocurrency projects in Switzerland told news.Bitcoin.com in a phone interview in Switzerland. “Switzerland is a very diversified nation, each bank decides which is its activity. And where it wants to go,” he said.

Why Does Switzerland Attract Cryptocurrency Talent?

From a judicial point of view, many global companies which come to Switzerland look at its judicial stability, Marc Walpoth, a Swiss jurist who formerly worked at the Intensive Supervision of Banks division at Finma from 2014 to 2017, explained. Walpoth is also now fully involved in the crypto business and compliance. “Finma, the Swiss financial market supervisory authority, is very stable with regard to regulations and is rather flexible,” he said, “Finma was created six years ago, it rewrote, and created new laws, however, Swiss banks are completely independent of the government. They decide the activities they wish to undertake, in coherence with the financial regulator. Which is different in many countries,” Walpoth explained. “It would not be acceptable in Switzerland that a Federal Councillor gives an order to banks to accept crypto companies. No politician in Switzerland would do so, and also Finma would not accept it,” he said. “Switzerland is a country were regulators are very flexible and exchange a lot of dialogs with the companies. That’s why we have a lot of entrepreneurs, generally inclined to take risks, because the political and judicial framework is quite flexible. This is deeply rooted in the Swiss culture.”

Before joining the crypto space, Jan Brzezek worked on innovation projects and proof of concepts, issuing bonds on the Blockchain within UBS. While in charge there, he said he worked on the USC (Utility Settlement Coin) in consortia with other global banks, such as Barclays and Credit Suisse. “Theoretically, you don’t need a bank anymore for many of the tasks they have been performing,” he explained. “The core competence of a bank is to offer clients safekeeping of their assets, so [banks] will now build up custody solutions. The question is not wether they are going to do that, but when.” Some believe Switzerland will reach this target by the end of 2018.

“I felt like Alice in Wonderland falling into the rabbit hole when I started to understand Bitcoin,” Brzezek said, “now it’s up to you, if you wish to stay in the traditional world, you are free to believe things will all stay as it is. Magic doesn’t happen when you stay in your comfort zone,” he said. Many bankers chose to adapt to where the money is. “[Banks] put their feet in the water, and they get a bit of experience, then as soon as they understand how it works, they go in, because there’s a lot of money, interests, and clients there.”

In the last 12 months, Finma, Switzerland’s banking and financial regulator has clarified what can be done and what cannot, with crypto. In September 2017 and February this year, Finma published a report clarifying how the Swiss law classifies ICOs. “The interesting point,” says Yassine Ben Hamida, the ex-banker, “is that the Swiss have not created a new law, but they made some clarifications on already existing laws and regulations,” he explained. Cryptocurrencies, tokens, and ICOs are considered securities, and in Switzerland, to manipulate securities as a broker, the regulator requires a broker’s license, which currently no one has in the crypto industry in Switzerland, he said, but which many in the Swiss crypto space are trying to negotiate with Finma, according to people familiar with the matter.

SIX, the Swiss main stock market, announced they would put in place a market for cryptocurrencies, particularly for all the tokens that are considered as securities. “SIX is owned by the Swiss banks, so isn’t it interesting to see that despite some lack of enthusiasm towards crypto that the Swiss banks seem to be showing, SIX has their backing to build a platform for digital assets ?” Yassine Ben Hamida told news.Bitcoin.com. “A lot of banks officially say they don’t do crypto, but behind the scenes, in front of their clients they are actually very active,” a source close to the matter said.

The mainstream media often reported that Swiss banks did not support crypto, or that they didn’t give authorization to companies working with ICOs to create corporate accounts. “I don’t think this is really true,” Yassine Ben Hamida said, “Switzerland is pretty strict in terms of regulations, particularly in terms of money laundering. But we are seeing a clear ‘professionalization’ in terms of crypto, and banks increasingly started to accept companies working with cryptocurrencies, or ICOs,” he added. There are banks in Geneva and in Zurich that reportedly allow companies with cryptocurrency funds. “This is developing now because there is a will to professionalize the industry,” Ben Hamida added.

What do you think of Swiss crypto entrepreneurs trying to acquire Swiss banking licenses?