BTC Price Jumps Over $1000 in Less Than an Hour 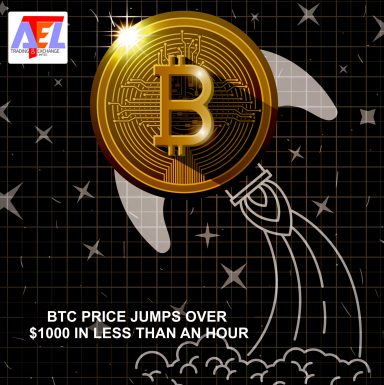 BTC Price Jumps Over $1000 in Less Than an Hour

The price of bitcoin and a wide range of other digital assets have seen some significant gains today. Earlier during the morning trading sessions (EDT) BTC/USD markets spiked over $1,000 in less than 60 minutes gaining 10 percent and reaching a high of $8,060 per coin. Following the phenomenal jump in value, buyers met some resistance and BTC’s value has dipped back some and is currently averaging a touch above $7,600.

Cryptocurrency markets are on a tear today as most digital assets jumped in value from 10-20 percent during the morning trading sessions on April 12. BTC trade volumes have spiked considerably worldwide as our last Markets Update six days ago reports a daily volume of $4Bn USD. That metric has doubled today as BTC trade volumes worldwide now rests at $8.1Bn over the past 24 hours. The top five exchanges swapping the most BTC today are Bitfinex, Okex, Binance, Upbit, and Huobi. Bitfinex has over $664Mn in 24-hour volume and USD trades have spiked significantly today. Last week the Japanese yen accounted for well over 60 percent of the BTC global trade volume but that metric has dropped to 45.4 percent. The USD is now up to 28.7 percent as the fiat currency has gained some steam this week. This is followed by tether (USDT 13.7%), the euro (4.3%), and the South Korean won (4.1%).

Looking at the 30-minute and 4-hour price charts on the exchange Bitstamp shows bulls are currently trying to push past resistance right now at the $7,600 range. After a few weeks of the long-term Simple Moving Average (200 SMA) being well above the short-term 100 SMA, the two have crossed hairs again. At the time of writing, the 100 SMA is above the 200 SMA indicating the path to resistance should be on the upside.

After dipping southbound over the last two hours the MACd is showing an upward trend as buyers eat through current sell orders. However, the Relative Strength Index (RSI) and Stochastic oscillators are well above the 80 range showing BTC/USD markets are overbought. Order books on the upside show some resistance at the current vantage point ($7,600) and another pitstop at $8,150. On the backside, if this run-up turns out to be another fake out bull trap then there are strong foundations between $7,500 through $7,100.

Overall cryptocurrency markets, in general, are up well over 10-20 percent and the top 100 digital currencies are all in the green. The second highest market valuation commanded by ethereum (ETH) is up 10.1 percent as one ETH is averaging $463 per coin. Ripple (XRP) has seen gains today around 12.1 percent and each XRP is $0.55 cents. The fourth highest market capitalization is held by bitcoin cash and its markets are up 8 percent. One BCH today is trading just above $700 per coin during the afternoon trading sessions. A newcomer has joined the top five cryptocurrency market valuations as EOS has pushed litecoin (LTC) out of the fifth position. EOS was up over 40 percent yesterday and is still up 22 percent at the time of publication. The Verdict: Uncertainty Remains After the Last Few Bull Traps Faked Everyone Out

Its safe to say a lot of cryptocurrency holders are pleased with the spikes in value this morning. Some traders not so much, as short contracts on Bitfinex and Bitmex had stacked up like a mountain over the past week and this morning most of them were liquidated. The jump in value still doesn’t show concrete evidence we will see a bullish reversal, but the increase does give some people a little hope. There have been bull traps and ‘dead cat bounces’ over the past few weeks so a quick and sudden rally is not surprising, but the question remains — How long will it last?

Where do you see the price of BTC and other digital assets heading from here? Do you think cryptocurrencies will see more gains?