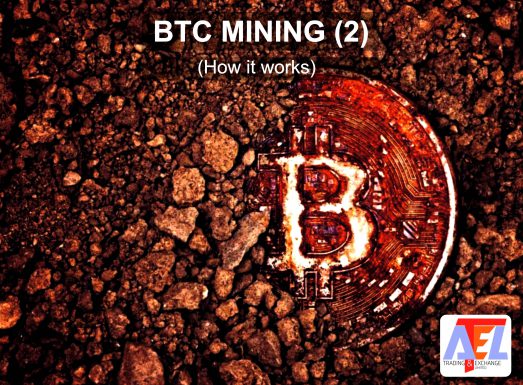 Most people still do not have comprehensive understanding of BTC Mining. To some, it is a mean of acquiring BTC while to others, it is the process of distribution of BTC.

1. What is BTC Mining?
2. What do you need to become a miner of BTC?
3. How does BTC Network reward its Miners?
4. How long does it take to earn BTC from mining?
5. Does the cost and effort really worth it?

What is BTC Mining?
Bitcoin mining is the process by which transactions are verified and added to the public ledger, called the BLOCK CHAIN
It is also the means through which new bitcoin are released.

What do you need to become a miner of BTC?
To begin mining bitcoins, you’ll need to acquire bitcoin mining hardware. Another option is to purchase in Bitcoin cloud mining contracts. This greatly simplifies the process ess but increases risk because you do not control the actual physical hardware.

How does BTC Network reward its Miners?
The Bitcoin network compensates Bitcoin miners for their effort by releasing bitcoin to those who contribute the needed computational power. This comes in the form of both newly issued bitcoins and from the transaction fees included in the transactions validated when mining bitcoins. The more computing power you contribute then the greater your share of the reward.

How long does it take to earn BTC from mining?
Earnings from the activity of Mining depend on a number of factors. One factor is the Mining Hardware one uses in the process while another is number of active users that connect to the Mining Pool of a particular Mining Hardware; the greater the number the higher the earnings. The speed at which you mine Bitcoins is measured in hashes per second.

Does the cost and effort really worth it?
Currently there are either no fees, or very low fees within Bitcoin Mining as it takes considerable longer period of time for miners to earn rewards.
With transactions, users might include fees in order to process the transactions faster. The higher the fee, the more priority it gets within the network and the quicker it gets processed.
With Mining, you get only a fraction of earnings related to solutions you’ve provided within the Blockchain. You’re rewarded once every 10 hours.