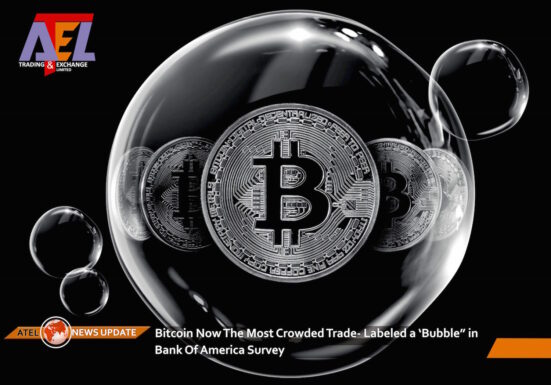 According to findings of a recent Bank of America (BOA) survey, buying bitcoin has now surpassed tech stocks as the most crowded trade. This new ranking means tech stocks have been relegated into second place for the first time since October 2019.

Still, a majority of the interviewed fund managers believe bitcoin “to be in a bubble.” Consequently, as the Reuters report notes, a majority of these respondents predict that the value of bitcoin will halve within 12 months.

Meanwhile, another survey by Deutsche Bank finds that many investors currently see bitcoin as the number one bubble. For instance, when asked to rank bitcoin on the 1-10 bubble scale, nearly half of respondents gave the crypto-asset a 10. Tesla is the next asset to be labeled a bubble by respondents after the tech giant’s stock “soared nearly 750%.” Tesla “is seen as emblematic of highly-priced tech stocks.”

However, in sentiments similar to those expressed by respondents to the BOA survey, a majority of respondents to the Deutsche Bank study predicted that in the next twelve months, bitcoin and the Tesla stock ie “more likely to halve than double in value.”

In the meantime, in other findings, the BOA study says “a record 19% of investors were currently taking on more risk than normal in their investment portfolios.” The survey also found that a “proportion of fund managers surveyed by BOA who said the global economy was in an early-cycle phase, as opposed to a recession, at its highest in 11 years.”

Furthermore, a record 92% expected higher global inflation over the next year, though Deutsche Bank’s survey also showed 71% expected the U.S. Federal Reserve to resist the temptation to start removing the stimulus that has helped markets rally.

Do you agree that bitcoin is the number one bubble ahead of tech stocks? Tell us what you think in the comments section below.