Bitcoin May not Be a Global Reserve Currency. But It’s Opening the Box

Home > slid > Bitcoin May not Be a Global Reserve Currency. But It’s Opening the Box 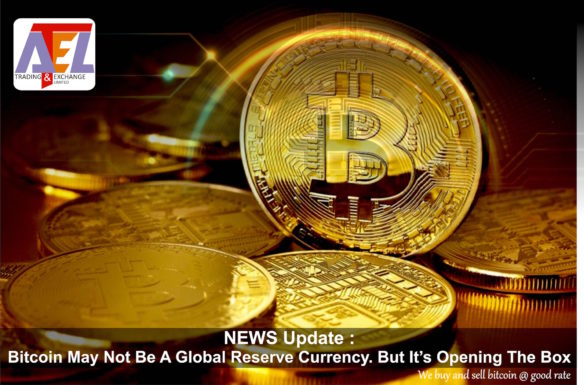 Bitcoin May not Be a Global Reserve Currency. But It’s Opening the Box

The birth of international economic cooperation and interoperability should be recognized as the beginning of a process of economic reconstruction that has contributed to the global imbalances worrying the markets today. It could also have set the scene for the solution.

The bulk of the U.S. stock market may be overvalued, and yields look set to go even lower – but a large part of the current strain lurks under the surface of the currency market. A combination of monetary easing, trade tensions and the threat of military action in the Middle East is a noxious cocktail for currency holders and hedgers as international conversions get risky and costly.

Perhaps because of this, as well as the disquieting brandishing of financial muscle by the U.S. administration, the chorus of questions about the role of the U.S. dollar as a global reserve currency is getting louder.

What’s more, it has held its leadership role for almost 100 years; the average global reserve currency lifespan over the past five centuries is 95 years. Shifting balances are hinting that the dollar’s reign may soon be up: its share of foreign exchange reserves is over 60%, while the weight of the U.S. economy in global output has fallen to less than 25 percent and is likely to continue trending lower.

Some have posited that there is a “non-zero chance” that bitcoin would make a great reserve currency. I disagree, I believe that there is exactly zero chance that could happen. I do think, however, that the global reserve system will radically change over the next couple of decades. Bitcoin could be a part of what emerges.

First, some background on the significance of Bretton Woods and why we should be paying attention.

In 1944, an agreement was drawn up between delegates from 44 nations that established the U.S. dollar as the world’s reserve currency, which would be pegged to gold. The other member nations would peg their currencies to the U.S. dollar, and the resulting relative stability between denominations would smooth world trade and boost the post-war recovery.

The agreement also created the institutions of the International Monetary Fund (IMF) and the World Bank to coordinate global currency movements and channel loans to developing nations.

The U.S. dollar stopped “officially” being the global reserve currency when President Richard Nixon took the country off the gold standard in 1971. It remained the de-facto global reserve currency, however, by dint of being the world’s largest economy and trading nation. Countries tended to hold more dollar reserves than all other foreign currencies combined, for the ease of transacting and for their relative stability.

Being the global reserve currency is a mixed blessing. While it makes it easy to borrow in international markets, it takes away power to influence the domestic economy.

If foreign debt holders start to believe that President Trump might encourage a devaluation of the U.S. dollar (as he has often hinted he wants to do), they would start to unload, as a devaluation would make their bonds worth less. Foreign holdings of U.S. debt currently amount to over $6 trillion, almost 30% of the outstanding total, so even a small unloading would be a shock to the market and would weaken the dollar’s credibility for some time to come.

As well as not being able to devalue when convenient, the additional global demand for U.S. dollars stemming from its reserve currency status is keeping the dollar’s value high relative to other currencies, exacerbating the current account deficit, now the largest in the world. And, whatever your views on Modern Monetary Theory (which posits, among other things, that debt levels don’t matter), the vulnerability of the U.S. markets to foreign investment strategies is disquieting.

Given the growing doubts over the need for and advisability of a fiat-based, single-issuer global reserve currency, you can see why the bitcoin narrative would pop up. Surely a sovereign-free, algorithm-based alternative would be more stable and trustworthy?

Perhaps, but it won’t be bitcoin*.

First, a global currency needs to have a flexible supply. The limits on the amount of gold banks could hold was one of the main reasons the gold standard didn’t work – economic growth outstripped the supply of gold-backed money, and the inevitable scramble to overcome this limitation led to destabilization.

Second, bitcoin will not become a universal settlement token for trading contracts. It’s too volatile. While this should soften in line with greater liquidity, it’s unlikely that businesses and sovereign powers will give up their preference for fiat, which they have some control over.

So, if not bitcoin, then what? What could an international trading currency that embodies both trustworthiness and flexibility look like?

One such model is Facebook’s Libra: a basket of currencies and government debt that is periodically rebalanced and used to peg a digital token that can be used for settlement.

But the whirlwind of debate around the coin’s purpose and backing has highlighted the strong distrust of corporate motives with global ambitions, and the simmering anti-trust scrutiny will make it difficult for any large enterprise to create a universal solution.

Another such model, much more likely, is a revamped Special Drawing Right (SDR). This basket of currencies was created by the IMF in 1969 to act as a private transaction token and a “store of value” for members. Its value moves in line with that of the underlying currencies: the U.S. dollar, Japanese yen, euro, British pound and Chinese renminbi.

Several economists have proposed the expansion of the SDR’s scope for purposes of international trade, positioning it as a global reserve currency that does not depend on any one issuer and can be managed by a neutral, supra-national organization with economic stability as its main objective.

The problem is, even a liquid SDR in its current configuration would be subject to national priorities and vulnerabilities. A sharp depreciation in the U.S. dollar as central banks switch to the SDR as a reserve holding could destabilize the basket. The euro is almost as significant as a global payment currency but carries an existential risk, however remote. The Chinese renminbi is still largely controlled by its government, and the British pound’s future is uncertain.

If only the SDR in its new liquid form could be pegged to a non-sovereign token of exchange that is totally free from political manipulation. You see where I’m going with this?

Other currencies would also form part of the basket, to reflect economic activity and allow flexibility in the supply. But a robust apolitical anchor could add a layer of trust, difficult to come by in an increasingly fractious trade environment.

How this mechanism would work, I don’t know – it would no doubt be complex and fraught with controversy, and anyone who studies currencies is aware of the colossal complications of maintaining a peg. But the building conviction that the current system is flawed and the increasingly apparent politicization of currencies will eventually shift the conversation from “it’s too difficult to attempt” to “let’s start talking about this.”

The biggest risk to the world economy right now is not trade tensions, overvalued assets or negative yields. It’s complacency in assuming that the status quo will hold. Profound change always costs a massive amount of political and economic capital, but it happens regardless.

None of us can be sure what the next step of financial evolution will look like – but we’ll soon find out. As economist Tyler Cowen reminds us in a recent article: “Every era’s monetary institutions are virtually unimaginable until they are created.”

Unfortunately, even getting the main participants to the table to discuss this will be a mammoth task. The Bretton Woods’ anniversary celebrations have given voice to papers and panels questioning the current reserve system, the role of the IMF and how to weather the economic storms ahead. Ideas and discussions are a start. But we shouldn’t forget that in 1944, just after the bloodiest war in history, what brought the participants to the table in a collaborative frame of mind was fear.

We can all fervently hope that it doesn’t take that level of fear to get everyone to the table again. What is different this time around is that the need for a reform is becoming startlingly apparent. The discussions are involving a much broader set of participants. And bitcoin is adding a new tool to the box of potential solutions.

On its own, it won’t solve the most pressing issues. But combined with other tools, and aided by diplomacy, academic rigor and patience, it could well form an integral part of a new type of reserve currency, which could help smooth or even avoid the shocks to come.

What do you think about cryptocurrency which could help smooth or even avoid the shocks to come.? Let us know what you think about this subject in the comments section below.

Disclaimer: Price articles and markets updates are intended for informational purposes only and should not to be considered as trading advice. Neither atelexchange.com nor the author is responsible for any losses or gains, as the ultimate decision to conduct a trade is made by the reader. Always remember that only those in possession of the private keys are in control of the “money.”